Report from the march of solidarity and protest in Ljubljana


Ljubljana - Comrades from Greece called for international day of action on Saturday the 20th of December. Protest in solidarity with the Greek uprising against the violence of the state and capitalism was one again expressed in Ljubljana. 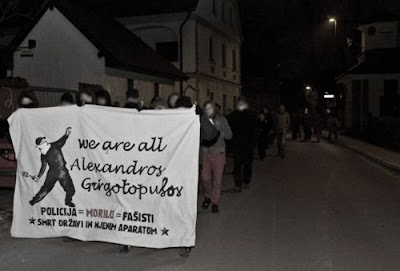 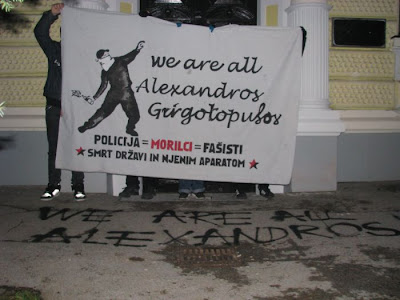 In late afternoon hours around hundred activists gathered to take part in the march of solidarity and protest "Today Greece, tomorrow the whole Europe!" and to disturb the festive atmosphere in downtown Ljubljana. They wore a banner: "WE ARE ALL ALEXANDROS GRIGOROPULOS! - POLICE=MURDURERS=FASCISTS – DEATH TO THE STATE AND IT'S APARATOUS!" and anarchist flags. The protesters chanted slogans of international solidarity and slogans against capitalism, violence and police. The famous Greek slogan "POLICE, PIGS, MURERES!" was also heard a couple of times in it's original form. On the way, the activists distributed the statement of Anarchist Initiative, flayers and other materials with informations on uprising in Greece to passers-by. 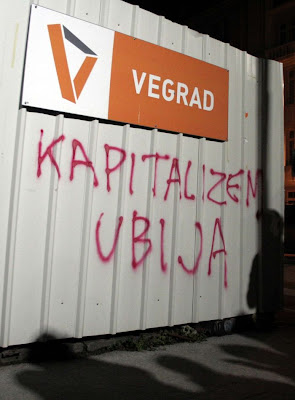 From the main square the group headed towards the Opera house, which is being renovated by a construction company Vegrad. On the fence around the construction site slogans "CAPITALISM KILLS!", "HOW MANY MORE 'ACCIDENTS'?" and "VEGRAD=MURDURERS" were written. This specific part of the protest was aimed to aware the public of the recent death of a 25-year old worker on Vegrad construction site Celovski dvori. The action was intended to connect the Greek uprising with a broader workers' struggle by linking the murder of Alexandros Grigoropoulos with the death of Adis Lagundžija. Work related "accidents" are a symptom of conditions under which the workers are forced to work and of the violence of capitalism that is based on brutal exploitation. 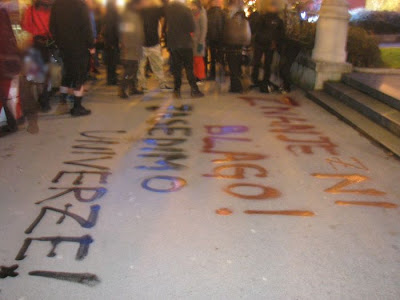 The next stop of the march was the building of University of Ljubljana, where slogans "KNOLADGE IS NOT A COMMODITY! LET'S OCCUPY THE UNIVERSITIES!" were written in front of it. At the moment 200 faculties and 800 schools are occupied in Greece and the students struggle against neoliberal reforms of the education system is one of central issues in today's Greek uprising. Greek students are facing the same problems as students in Slovenia and elsewhere in Europe. In this way the protest wanted to connect a wider students' struggle to uprising in Greece and also the struggle of students in Slovenia with the students' struggle in the world. 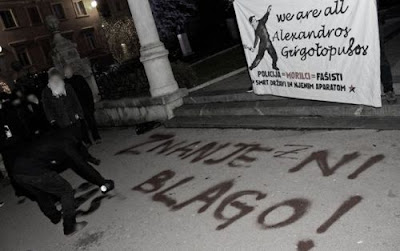 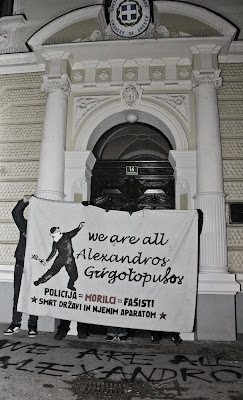 The protesters moved towards the Greek embassy. There they wrote "WE ARE ALL ALEXANDROS!" and "COPS - OFF THE STREETS!". The flag of Greece hanging in front of the embassy, was also torn down. Lighted smoke bombs contributed to already very positive atmosphere of the march. The aim of the protest was to express the full support with people on the streets of Greek cities and to condemn the Greek authorities for their violent acts in the past and the present. 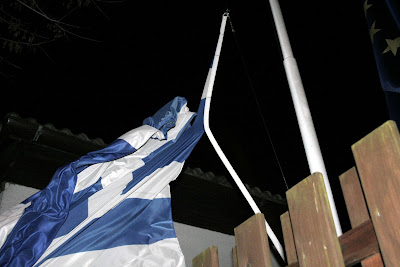 The final point of the march was the Spanish embassy. Mass solidarity marches and radical actions are being organized in Spain in support with the Greek uprising. In Madrid and Barcelona 15 activists were arrested and are facing charges for attacking local police station and some banks. The protest in Ljubljana was because of this events directed also against the Spanish authorities. The solidarity with the Spanish anarchist was expressed in a slogan "FREE ALL POLITICAL PRISONERS!" written in front of the embassy. 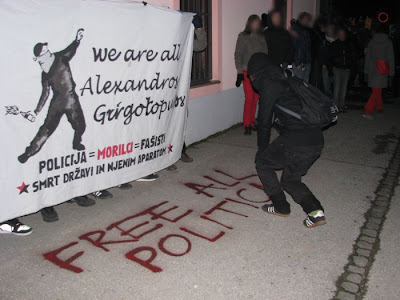 In the end of the march the police tried to stop and identify the protesters but were unsuccessful. The activists ignored the orders of the police, resisted the repression and ended the protest with their arms linked.

See report from past solidarity actions in Ljubljana:
News 09/12/08